About Us » Our Namesake 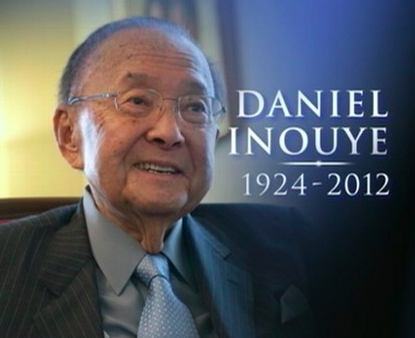 "Senator Inouye's commitment to Hawaii's public schools throughout his career continues to benefit thousands of students, from securing federal resources to advocating for military families," said Superintendent Kathryn Matayoshi. "The late Senator's legacy lives on and naming this school in his honor is fitting for all he's done for Hawaii and the service to his country."

"I think this school is very representative of the commitment that Senator Inouye had. Particularly, combining support for our military dependents children, and this school being on a military facility, and his support for education and how foundational education is.

- Senator Mazie Hirono at the dedication ceremony on October 17, 2016.

A 2011 assessment ranked Hale Kula ninth on a list of 160 reviewed schools eligible to apply for a piece of a $250 million DOD Office of Economic Adjustment grant. In March 2013, the DOD awarded Hale Kula $26.6 million in funds, with another $6.6 million provided by HIDOE, to go toward construction, renovation, repair or expansion of current facilities.

The school received a new administration building, a new two-story classroom building, a new student center and library-media center, additional classrooms, and renovation of existing classrooms. As Chair of the Senate Defense Appropriations Subcommittee, Senator Inouye played an integral role in getting funding to support this type of facility repairs for schools which serve military children.

The senator’s family donated several items to the school which are featured for students and visitors to see, including Senator Inouye’s Purple Heart, photos and military coins he earned in the military as given while a lawmaker.